The network rework project is finally completed, many months later.

Yup, it's some shelving on wheels. The chunky black case is the “old” server, currently turned off while I decide what on earth to do with all of the leftover hardware/components 😓 Stitch is the official server mascot. 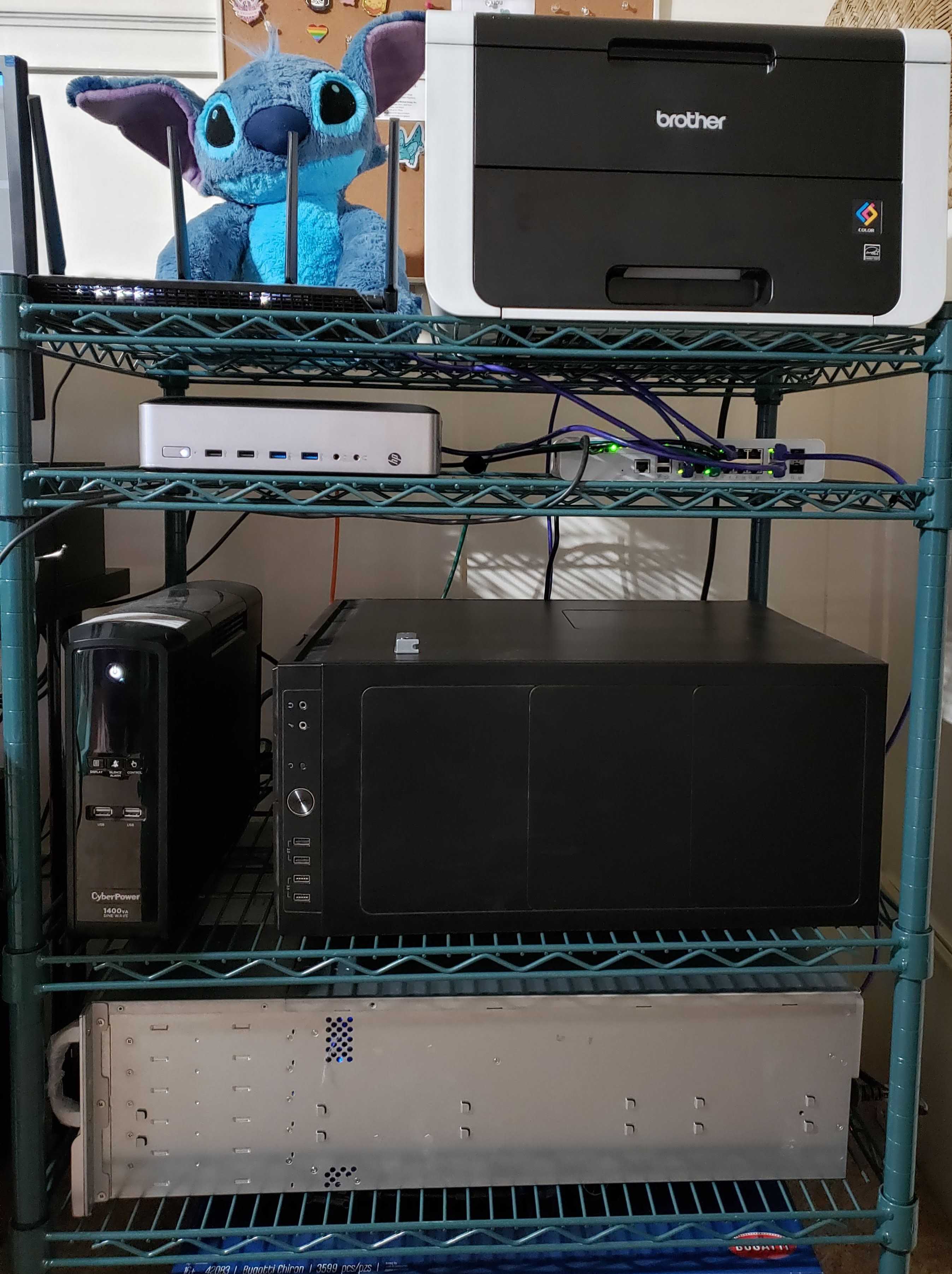 Installed pfSense and spent a LOT of time breaking the network, annoying my wife no end. Things are now in a working state, honest.

I ran into a lot of issues trying to use pfSense's DHCP/DNS with multiple subnets, the devs seem to be vehemently opposed to letting you do this for some reason.

After going through the usual “finding a USB stick that still works” adventure, I installed FreeNAS and started trying to get a feel for it. It seems nice if you just want a NAS, or a NAS with a few extra bits, but I ultimately decided that it would make more sense to use the new monster server for everything. Compatibility is an issue (I write a lot of .NET Core lately), and FreeBSD's bhyve hypervisor is annoying at best.

Next adventure: Proxmox VE. ZFS/NFS is managed directly on the server, and everything else runs in a large pile of lightweight Linux containers and occasional heavier VMs. The only real issue so far has been how easy it is to completely break the Proxmox web UI while trying to get container UID/GID mapping working.

It currently runs 9 containers and 2 VMs, with a lot more planned as I get deeper into self-hosting things. The dnsmasq (multi-subnet DHCP/DNS) and Samba (Windows file sharing) containers are the only important ones, but hey, learning!

Having never used enterprise networking gear before, this ServeTheHome thread has been a MASSIVE help. I now have VLANs, broadcast forwarding (DHCP!), and some very basic ACLs! VLANs:

At some point I'll get around to having a separate VLAN for services (an internal DMZ?) to simplify ACLs, they're a bit horrifying right now.

There's always more things to do, but learning new things is at least half of the fun for me!

Yeah, these need to happen. Super looking forward to the initial process of syncing the important stuff (cat/dog pictures and videos) to THE CLOUD with Comcast's miserly upstream.

Everyone likes pretty graphs, right? I'd like to be able to monitor a variety of metrics, and it looks like Grafana (pretty dashboards) + InfluxDB (time series database) + Telegraf (metric collector) is the way to go.

A large chunk of my work (and all of my weird side projects) use Docker/Docker Compose, but Docker for Windows is pretty bad. Probably makes sense to set up a Docker VM each for home/work. Will need to test to see how awful this will be via NFS.

LDAP? FreeIPA? That other thing with a weird name? I'd like to not have to create user accounts over and over again.

Separating the SERVER VLAN into SERVICES and MANAGEMENT might make sense too.